Last Christmas one mom gave her 13-year-old a new phone – accompanied by a list of 18 rules he’d have to follow to keep it.  It’s made the rounds of TV stations and Facebook, but if you haven’t read it, you can check it out here:  Gregory’s iPhone Contract.

I shared it with my 7th and 8th grade girls and learned that some of them text late into the night (and very early in the morning), without their parents’ knowledge.  A handful have phones protected by passwords which their parents don’t know.  If the phone gets confiscated, they’re smart enough to delete any incriminating texts or photos before handing it over.  One or two said that their parents don’t even know how their phone works.

Most parents agree that there should be some rules for phone use, but many are either too busy or too reluctant to actually enforce any.  They may insist the family computer be kept in the living room,but  they forget that a smart phone places all of cyberspace – and hundreds of fun apps – right in the palm of an adolescent hand.

While 18 may seem excessive,  it is important for parents to make at least a few rules – and to enforce them.  Just like proper hygiene, appropriate cell phone usage has to be taught.  Discuss with your teen restrictions on time limits and your expectations for text, picture, and internet content, and agree on consequences for broken rules.  Take charge of the cell phone rather than letting your teen be in charge of it.

And don’t forget that one of the nicest things about cell phones is their portability – they fit nicely into parents’ purses or pockets!

When I finally got around to reading Wicked (sort of a back story to The Wizard of Oz), I was surprised by the sexual content in the first few pages.  Surprised because I’d borrowed it from a 7th grader, and because I’d seen several students reading it in years past.

Another book  that surprised me was The Lovely Bones (also loaned me by a student).  I’d expected some gruesome parts, but there was a fair amount of sex in it, too.

It’s hard to predict how middle schoolers will respond to graphic content.  Even without seeing pictures, highly visual people will be unable to get certain images out of their minds after reading detailed descriptions.  Many students have told me of sleepless nights because they were kept awake thinking about scary or disturbing stuff.

Wise parents will keep in touch with what’s in books and movies being viewed by their young teens.  Previewing content before allowing a middle schooler to read/see it is a good idea.  Having a discussion after reading or viewing is a must, because if it’s sexual, a 12-year-old will wonder if such behavior is normal.

When I see books about vampire lovers and futuristic mass murderers in my classroom, I ask, “Do your parents know you’re reading this?”  The response I hear most often is, “They wouldn’t care.”

I hope that’s not true.  I hope most parents care enough to protect their middle schoolers until they’re old enough to handle inappropriate content in a mature and discerning manner. 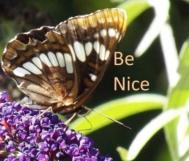 I’ve always said that civilizing students is part of my job.

While discussing how to improve classroom relationships, one of the girls said she didn’t feel the need to be friendly to girls she didn’t like.  “That would be like faking nice,” was her argument.  I explained that the world revolved around people “faking nice” to each other.  In the adult world, “faking nice” is another term for courtesy, tact, and manners.

For instance, when a senior citizen meanders down the supermarket aisle ahead of me, I wait for an opportunity to smile and go around.  It wouldn’t do either of us any good if I yelled at her to move faster.  And when someone greets me with a cheery “Good morning!” before 10 a.m., I refrain from biting his head off and instead reply with a terse “Morning.”

Learning to be genuine without hurting others’ feelings is an important social skill, despite what teens may see on reality TV.  But “faking nice” doesn’t come naturally; parents have to teach – and model – appropriate social behavior.  It’s helpful to point out to your teen when you’ve said something contrary to what you were thinking, and then have a discussion about why tactful responses are kinder than hurtful ones.

(By the way, if you run into those judges from American Idol, please tell them I’d like to talk to them.  Thanks!)

Bad days happen to all of us.  And while watching your best friend eat lunch with someone else might not compare to hearing rumors of layoffs at work, to your 13-year-old it’s a pretty big deal.

Imagine if, on your bad day, you  complained to a friend or spouse, and he responded, “That’s all you have to complain about?  I wish my life was so hard!”  Not only would you feel irritated, but you’d also hesitate to share with that person again.

If you feel that your teen doesn’t tell you much, check your responses.  Your teen or pre-teen considers herself more of an adult and less of a child, and she wants you to treat her as such.  Though she’ll still often respond like a child, sometimes she’ll surprise you with her maturity and insight.

The next time your teen whines about his terrible day, try responding as you would to a friend or co-worker:  “That does sound lousy.  Poor you.”  Don’t discount or solve any problems; just listen with empathy.  You’ll get more information and you’ll get it more often.

And the next time you have a bad day of your own, chances are good your teen will give you a little empathy in return!