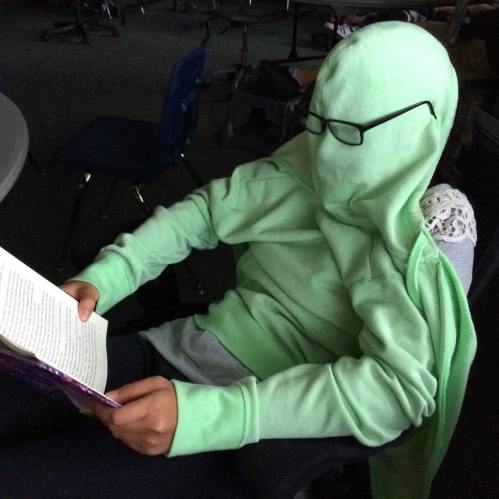 In a recent radio interview I was asked how students were different from when I began teaching over 30 years ago. One major change I’ve observed is that students suffer more anxiety today. It impacts their learning if they miss school, and when they are in class they struggle to focus. For those with serious anxiety disorders, professional help is a must, but for many students some changes at home can make a big difference. Here are four strategies to help your teen or preteen reduce anxiety and increase learning this year.

More reading. We live in a visual world, where we turn to YouTube for instructions instead of reading the manual, and we video chat instead of writing letters. But there are still benefits to reading words on a page, whether in an ebook or on paper. As readers create images in their brains, imagination and visualization skills increase. Mentally visiting other worlds, both make-believe and real, can reduce anxiety by providing a distraction and a chance to forget one’s problems for a while. Reading also builds vocabulary and writing skills. Non-fiction increases knowledge and can make one an expert on a favorite topic (“Did you know. . .?”). In my classroom I turn on soft instrumental music and turn down the lights, and the atmosphere becomes calm and peaceful. Students actually sigh with pleasure as they settle in to read.

More sleep. Because they’re still growing, teens need 8-10 hours of sleep a night, which they rarely get. But sleep is important for more than just growth. According to the National Sleep Foundation, “Mental health is both impacted by and impacts how well a person sleeps.” Teens who don’t get enough sleep are more prone to anxiety and depression. Not surprisingly, the biggest robber of adequate sleep is technology. Teens who take their phones to bed with them can be up past midnight using Snapchat to text–or sext–their friends, or they’re watching videos and playing games. Phones should be handed over to parents or parked in a designated spot at bedtime. Getting enough sleep also helps with focus, learning, and appearance. The latter might be enough to convince self-conscious teens to go to bed earlier, as a lack of sleep affects skin and hair quality. Because of changes in their circadian rhythm, teens may not fall asleep until 11:00 or later, but bedtimes should still be earlier, as even resting in a dark room has benefits.

Less social media. There’s growing evidence that more time spent on social media means more unhappiness for teens (check out an article from Child Mind Institute), often caused by feelings of insecurity and inadequacy when comparing one’s life to others’. Young teens also absorb information from Tumblr or Reddit without the experience or maturity to filter fact from sensationalism. It’s an interesting paradox that while social media keeps them more connected to one another, it also increases feelings of rejection if their posts are ignored or don’t get as many likes as their friends’ posts. Stalking and trolling (leaving mean comments) can also lead to hurt feelings. All of these emotions and relationship issues carry over into the classroom, making focusing on classwork difficult.

Less conflict. What are your battles? Homework? Chores? Appropriate clothing? Arguing and anger produce stress, which causes physical changes, including a rise in cortisol. Among other things, too much cortisol can interfere with learning and memory. Yelling and threatening will never result in a teen saying, “You’re right. I’ll change.” Okay, nothing makes them reply that way, but staying calm while holding firm to your values will get you further. Refrain from sarcasm and statements like “What are you thinking? You’re hopeless! I’m done with you!” that only cause defensiveness. Making your point is more important than issuing consequences or angering your teen, and stiffer penalties can lead to rebellion rather than compliance. Begin with clear expectations and don’t overreact to their responses. Expect respect, but if your teen glares at you or walks away muttering, just let it go. Regardless of how it appears, assume you’ve been heard. When you have to ground him or take away her phone, do it calmly and with few words. As Cynthia Tobias says, “Issue more tickets and give fewer lectures.” Years ago I compiled a “No-No List” of common mistakes parents make in trying to communicate; you can find it here.

Anxiety affects students regardless of their capabilities. Anything we can do both at home and in the classroom to ease their way can have a lifelong impact. But if you’re going to make changes, be sure to do so with the cooperation of your teen or preteen. Instead of demanding they read more, go to bed earlier, and spend less time on their phones, involve them in a discussion and invite their input. Problem-solve together and come up with a plan. That way, you’ll also have less conflict–and more success!

Sue currently teaches middle school at Concordia Lutheran School in Tacoma, Washington; she and Cynthia Tobias are co-authors of  Middle School, the Inside Story: What Kids Tell Us But Don’t Tell You, available online and in bookstores.