We knew we were in trouble when our 3 1/2-year-old son Matt would sit at the table for up to 2 hours, refusing to finish his dinner. We’d fly the airplane into the hangar, tell him “3 more bites”, race with Daddy, take a bite ourselves, display the scrumptious dessert reward – nothing would work. That kid would sit there refusing to to eat until we gave up and sent him to bed.

It was apparent that he had inherited his mother’s obstinacy and his father’s stubbornness. We called him “strong-willed” or “just plain difficult,” and he would have been a terror as a teenager had I not stumbled upon what I call the “Walk-Away” policy.

Accompanying his need for control was Matt’s strong desire to do what was right. We learned that if we laid out our expectations and then walked away, he would feel the pressure of those expectations and eventually do what he was supposed to, albeit in his own time. However, if we stood over him and insisted he do it now, on our time, he would accept whatever consequence he had to–but he would not do what was asked.

When you have teenagers in the house, you expect them to do their chores, get their homework done, and clean up after themselves.  When you say, “Please do those dishes now,” sometimes it’ll work like a charm.  Sometimes it’ll cause an argument: “Why do I have to do everything around here?” “It’s not my turn; I did them last time!” “I can’t–I have too much homework.”

Instead of getting sucked into an argument designed to distract you, or being manipulated into giving an ultimatum (which may backfire on you), state your expectation but leave room for some control:  “Please get started on your homework before 7:30.”  Then walk away and resist the urge to nag.

This won’t work with all personalities. For some kids, when you walk away they’ll forget what you just said, or maybe choose to ignore you. But if you have an”I’ll-do-it-because-I-want-to-not-because-you-told-me-to” teen, it’s a survival technique. It can keep you from getting sucked into a power struggle where you have to up the consequences (and then follow through with them). More importantly, it keeps your relationship with your teen on a positive footing instead of it deteriorating into resentment and hostility.

Matt is grown and out on his own now. His stubbornness and desire to do what’s right have helped him to become a young man of integrity and perseverance.  Best of all, we have a great relationship–his favorite line, spoken with a shrug and a grin: “What can I say?  You know how I am!”

or talking back. (See Don’t Be a Helpless Parent.)  This time we’ll tackle two more issues that cause parents to throw their hands up in despair: social media and chores.

1. Beyond Twitter and Snapchat Be aware: most teens do not use Facebook as their primary contact with friends.  They use Instagram to keep up with friends’ activities (fewer words, more pictures), and Snapchat for conversations.  They also use apps like Kik, or Yik Yak to chat with friends–or strangers.  Apps such as Kiwi and Whisper go even further and allow users to communicate anonymously.  Think of the power that gives middle schoolers to hurt–and be hurt by–one another.

If your teen owns a smartphone, tablet, or iPod (which connects via wi-fi), you need to keep on top of how they’re using it (also see When Is a Calculator Not a Calculator?).  Ask your teen to open the apps and show you how they work, and require that they give you passwords (you can open most accounts from you computer).  Tell them you won’t be checking all the time, but they should expect you to look in once in awhile. You need to weigh the awkwardness of invading your teen’s privacy against the possibility of them falling victim to–or being tempted to start–cyberbullying, or striking up a relationship with a (possibly dangerous) stranger.

2. Doing Their Share  While it’s nice to have your kids help around the house, the benefits go beyond having clean dishes.  Children who do chores at home do better in school and grow up to be more successful adults (check out Why Children Need Chores in the Wall Street Journal).  You would think that by adolescence, chores would have become a habit, but most parents find themselves in a daily battle to get their kids to do even the most basic of tasks.

After years of being frustrated with my children and tired of hearing myself nagging and complaining, I called a family meeting with my sons (then 10, 12, and 14).  I laid out which chores needed to be done daily and let them decide on a fair division.  They determined each job would be done for a week, switching on Saturdays.  We discussed consequences for not doing chores, and they agreed that being grounded from all screens (computer, TV, video games) for three days was appropriate.  For a second or recurring offense, they came up with the Chore Slave, who would be at the parents’ beck and call for an entire Saturday.  The key was to involve them in coming up with a plan.

I in turn agreed that if chore didn’t get done in a timely manner, I would do it myself and calmly issue the consequence.  This resulted in me sometimes preparing to load the dishwasher, only to be nudged aside by a desperate boy.  I never refused his offer, nor did I make a snarky comment like, “About time you showed up.” My goal was for them to do chores without being yelled at, so I graciously left the kitchen without a word.

Just as it was worth your while to teach your preschooler how to tie a shoe or ride a bicycle (both struggles I remember well), it is also critical that you hold your ground on major issues in adolescence.  Parents of 13-year-olds have about five years before they graduate from high school.  That may seem like a long time to fight the good fight, but you will be preparing them for decades of responsible adulthood. 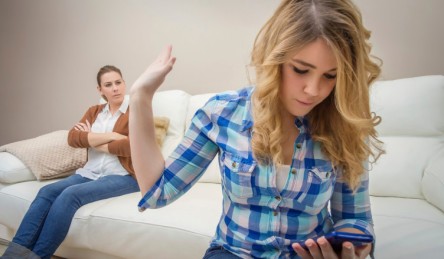 For some reason, parents who have survived the skirmishes of toilet training, toddler tantrums, and bedtime battles lose their backbone when faced with a sulky or defiant teen. Parents of middle schoolers express helplessness when it comes to dealing with cell phones, sassiness, social media, and chores. The authoritarian parenting days are gone  (think Mr. Banks in Mary Poppins), but parents should still be bosses in some critical areas, even if it means being on the receiving end of angry outbursts.  I’ll tackle the first two topics in this blog and continue with the others in the next.

1. Cell Phones  Teens with smartphones have access to the whole world, yet many parents have no idea of what they’re seeing or whom they’re chatting with.  Parents say, “She’s always on that thing, and I don’t even know how it works” or “I can’t get him to put it down long enough to have a conversation.”  They worry about invading their child’s privacy, and they don’t feel they have the right to insist on a No Phone Zone.  I like to ask parents if they would let their teens entertain strangers behind closed bedroom doors, then I point out that allowing them unmonitored access on their phones is no different.  Too much privacy for teenagers is not a good thing.

Setting ground rules before handing over a phone is a must–some parents even use a contract (click here for a sample).  At the very least, let your teen know that you will randomly pick up the phone and look through it.  That knowledge alone will prevent some bad choices.  And don’t be afraid to take away the phone for a few days when you’re not happy with how it’s being used, or for other disciplinary reasons.  As I’ve said before, no teen has actually died from being grounded from phone use, and being kept away from their friends and social media is a consequence they’d rather avoid.

2. Backtalk  If you’ve ever said, “I wasn’t allowed to talk to my parents the way my kids talk to me,” it’s time to make some changes.  You deserve to be respected, but respect isn’t something you can demand.  Begin by checking your tone of voice when talking to your kids.  If phrases like “Who do you think you are?” or “You’d just better watch yourself,” spoken in harsh or sarcastic tones, are part of your repertoire, you aren’t modeling the respect you expect to receive.  Lower your voice, add please and thank you to your requests, and keep your tone as neutral as possible. Then expect the same.

When your teen is being hostile, don’t engage in a battle of words and defensiveness.  If I’m facing a disrespectful student, I hold up one finger and say, “Not feeling very respected right now.  Care to try again?”  When my sons had snarky attitudes, I would gaze patiently–but silently–at them until their tone changed.  If it didn’t, I’d tell them we’d talk later. If it did, I didn’t shoot myself in the foot by mentioning it (as in, “Oh, I see you can be nice when you want something”), I just let the conversation continue in civil tones.

Teens are masters at the art of deflection.  A  question: “Why do I have to do all the chores?” or complaint: “You never let me do what I want to do!” can derail a parent from the original request and set up a scenario of defensiveness and arguing that quickly escalates into anger and hurt feelings on both sides.  It’s better if you don’t engage in the battle.  In fact, if you can smile, shrug, and say something infuriatingly calm like, “It’s my job to drive you crazy” or “You’re right,” your teen may just huff off in frustration and do whatever was asked.  Complaints and questions aren’t always genuine; often they’re just a way of expressing displeasure.  Ignore the huffing and do some deflecting of your own, and there will be far fewer battles.

You are the parent, and your job description includes times where you have to make your teen unhappy.  Be calm, be respectful, be firm–but whatver you do, don’t be helpless!