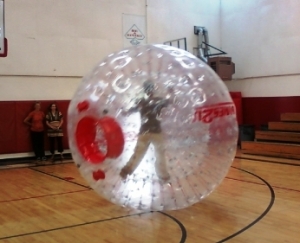 As an incentive for our school’s fundraising campaign, we had a “human hamster ball” for the assembly.  Once inside, you can move it all over the room, but you’re insulated from everything outside; voices are muffled, and things look blurry.  You become focused on the sound of your own breathing as you concentrate on just keeping the thing upright.

Teens grow their very own version of this when they hit adolescence.  The hamster ball – or “bubble,” as I call it – is a major source of frustration for parents, because it narrows the teens’ view to about two feet away from themselves.  In other words, they’re oblivious to anything that doesn’t directly concern them.

To parents, this looks like self-centeredness in the extreme, and many fear they’ve raised the World Champion of the Me Generation.  “It’s like he doesn’t even know the rest of the family exists!” they cry, as they stumble over his backpack in the middle of the room or face another accusation of, “You never told me that!”

The good news is that it’s a normal stage in development, and there’s a good reason for it.  The bad news is, it’s going to be around for awhile (we’re talking YEARS, not months).

Just as the hamster ball occupant concentrates on his immediate surroundings, so teen-agers focus on what’s going on inside themselves.  Between the ages of 11 and 16, they will grow several inches taller, their body shapes will change dramatically, they will sprout hair in places they don’t want to tell you about, and their faces will lose their childish roundness – and those are only the VISIBLE changes!

Mentally, they’re able to think in more abstract ways, and they can lie awake long into the night pondering things like infinity or “what would happen if the earth were turned inside out?”  Emotionally, they’re all over the place:  hyper and silly one moment, and raging in anger the next.  They’re as confused by it as you are!  Spiritually, they’re no longer accepting what they’ve been taught just because they’re told to.  They’re searching for answers that make sense to them.

Teens will spend hours looking in the bathroom mirror – not so much out of vanity, but out of fascination at how different they look from just a few weeks ago.  They’re also comparing themselves to their peers, and many times they’re not happy at how they measure up.  Meanwhile, they’ve forgotten there’s anyone outside the door, waiting for a turn in the bathroom.  Self-absorption has become a means of survival.

This is why one of my students wanted to pray for his mom this week because she’s traveling, but he couldn’t tell me where she’d gone.  Or when she’d be back.  He did know she’d be leaving again on another trip.  Soon.  To somewhere.

Most teens don’t mean to be inconsiderate; they’re just unaware that there are people outside their bubbles.  It takes a lot of reminding – and sticking your head inside their bubbles – to get them to look beyond themselves and see the dirty dishes in the sink, or the people waiting to walk through the doorway they’re blocking, or the annoyed looks on people’s faces because their voices are too loud.

The bubble isn’t an excuse for rude behavior, but adults who understand and acknowledge its presence may have a little more patience as they deal with its consequences.  Teens are often embarrassed to discover they’ve ignored someone else’s needs.  If they’re gently reminded, they’re likely to apologize and make things right.

For just a few minutes, the bubble will have thinned, letting light inside.  Just don’t get too used to it. . .

As I sit here on my lanai in Kauai (let the envy begin), I’m struggling for an idea for a new topic.  No, it’s not because I’m a little distracted by my surroundings – oo, listen to those waves! – it’s because this is my 85th post, and I run the risk of repeating myself.

Give me some advice, please – should I revisit important topics, like empathy and the bubble concept, which would be helpful for newer readers but old hat for long-time readers?  I’d really like to address issues you’re currently dealing with or pondering.  Even if you don’t have teens anymore (or yet), you must see things when you’re out and about that might be worth a post.

Right now, I’m 2700 miles from my classroom, which may play a part in my difficulty in coming up with an idea – that, and the palm trees rustling over my head.  So would you please take a moment to reply or comment and tell me what to write about?

I saw another allegory for adolescence today (I see these often but forget to share them):

At the beach, a toddler walked behind her parents at the water’s edge.  Whenever a wave reached high enough to touch her toes, she squealed and moved farther up the beach.  As the water receded, she moved right back to the edge.  Her parents stayed nearby – but in front of her, not behind her – communicating an air of nonchalance about her safety.  I did notice, however, that at least one of them always had an eye on her.

When she stumbled, Dad held out his hand for her to grab, but she let go as soon as she felt confident.  Not once did Mom or Dad pick her up and carry her (most likely kicking and screaming) to their destination.  They let her set her own pace, but they were close enough to help if she needed it.

Here’s hoping they can repeat the performance in another ten years or so. 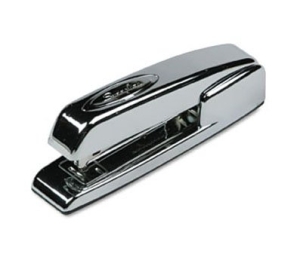 I paid $20 for a new stapler tonight.  It’s not gold plated, but it IS guaranteed to be jam-free.  For years I had a shiny chrome Swingline stapler which sat on the corner of my desk, defying any student to harm it.  At the end of last year one of my students managed to pop the spring out of place.  In my attempts to pop it back in, I mangled the spring so badly I had to bury it at sea.  (Okay, I tossed it in the trash, but that sounds like such a dishonorable ending for such a work of art.)

I started this year with a new stapler, neither shiny nor defiant.  Not even a Swingline, it’s a bargain brand chosen from the Office Max catalog by our school secretary.  She’s doing a great job of keeping our office supply expenses within the budget, but she doesn’t understand the psyche of the young adolescent.  (Nor do I, actually, but I do a good job of appearing like I do!)

Young adolescents (12 to 14-year-olds) are a danger to our materialistic goods for a number of reasons.  To begin with, they’re inquisitive without much sense of how fragile an object may be.  “Oo, what’s this?” they say as they grab whatever catches their eye.  If this behavior sounds familiar, it may be because you saw it in them when they were about 3.  The cause hasn’t changed; their curiosity once again is outweighing their judgment.  This leads them to squeeze, shake, and manipulate items, the better to explore them.

Secondly, this age group is clumsy.  When they enter a growth spurt, hands and feet grow first, followed by legs and arms, and finishing with the torso.  Consequently, adolescents drop things, knock them over, and crash into them as a regular daily activity.  Casualties in my classroom over the years have included a small lamp, two CD players, multiple staplers and tape dispensers (the middle wheel gets lost), the carpet (seven-year-old ink stains), window shades, several office chairs, and a pencil sharpener.  I don’t supply or decorate my classroom with anything too valuable, for obvious reasons.

And lastly, the bubble effect – that phenomenon that narrows their view to within a few inches of themselves – comes into play.  In this case it takes the form of not being able to think through possible consequences of their actions.  This is why they are shocked when the basketball hits the light fixture, or the cell phone smashes on the floor instead of being caught.  It just didn’t occur to them that such an accident could occur!

You do have some choices during these difficult years:

Me?  I’ll keep an eye on my new heavy-duty stapler while moving a table over the ink stains and enjoying the sounds of my ancient CD player that’s missing several buttons – did you know you can still make it work if you press hard on that little metal thingy inside?

A typical exchange in my class:

At which point I simply wait, a patient smile on my face, until somebody hisses at Raymond, “Say please!”

When kids get to about 5th or 6th grade, they may decide that manners are childish, so they stop using them.  I, however, still expect – and demand – them in junior high.  But not by reminding them, as in “Say, please” or “What’s the magic word?”  I just wait, which causes them to figure it out for themselves.

If I’m distributing worksheets or newsletters, as soon as anyone says, “Thank you,” I comment on how much I appreciate his manners.  Most of the rest of the students will follow suit.  I also thank students for not interrupting, for saying “Excuse me” when they bump into me, and for holding the door open.

I like to say, “It’s my job to civilize my students.”  I teach them to walk around  two people who are talking, instead of between them.  We also practice looking people in the eye, shaking hands, and saying, “Nice to meet you.”  These are useful skill for adults to have, but teen-agers don’t pick them up without being taught.

Do a self-check:  do you expect the teens in your life to be polite and well-mannered?  Do you model that for them?  As in, “Pick up your coat, please” (instead of “Get that coat off the floor!”) or “Excuse me, can I interrupt your show?” (instead of “Turn that thing off so I can talk to you”!).  Or maybe you resort to nagging – “Can’t you ever say please?” instead of waiting until the manners show up.

Please encourage your teens to be polite.

I'd love to be your keynote speaker or workshop leader. Please contact me at mrsacuna@msn.com for scheduling, fees, and topics, or go to my website: sueacuna.com.
Join 1,024 other followers