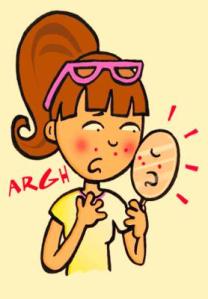 I saw the woman glance in the direction of my feet as she went out the door at IHOP.  I froze, because I knew she had seen my rash and was disgusted by it.  Then I mentally shook myself – why did I assume she was looking at me?  I’m an adult and beyond this kind of self-conscious panic!  Aren’t I?

I’ve been dealing with an eczema-type outbreak all summer, and the experience has renewed my understanding of the self-consciousness of teens.  Unable to wear shorts, I invested in capris, which would show less of my legs.  Yet I was still paranoid, feeling like the spots on my legs glowed in a beautiful shade of neon red, when in reality, only the lower three inches of my leg showed, and there were very few spots in that region.

It is a sensitive parent who can remember being 14 and having an ugly zit plant itself on her nose.  Teens are hyper aware of how much their appearances are changing during adolescence, and anything that can make them stand out (at best) or be the center of negative attention (at worst) takes on nightmare proportions.  This can have a paralyzing effect, as in, “I can’t go to school looking like this!”

As parents often discover, it does no good to assure a teen that “no one will notice” or “it’s not that big a deal.”   It actually might be easier to go buy some cover-up than to argue!  But do your best to show empathy without adding to the angst (“I remember how much I hated those zits” is better than “Oh, no!  Poor you!  That just looks HORRIBLE!”).   Try to find a balance between downplaying the situation – and making too much of it.  Communicate that you understand how difficult it is to be a self-conscious teen-ager, and reassure your teen that it won’t last forever.  Hair grows out, scars fade, braces come off, skin clears up.