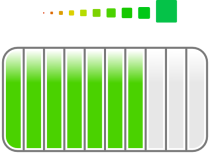 While waiting for an update to load on my computer, I find myself staring at the numbers that show me how much progress it has made.  It starts out at a good clip: 15%. . .28%. . .35%. . . and then it sticks.  I cheer when it starts moving again – and then it stops at 88%.  Finally it makes it all the way to 100%, and I am relieved.  Until I remember there will be another update coming along soon.

Waiting for a middle schooler to develop adult traits and habits can be just like that.  They progress in fits and starts, and sometimes it seems they stall altogether.  For example, consider being responsible for one’s own stuff.  After months of nagging and complaining, parents might be delighted when their son remembers to take all of his basketball gear to school for two weeks in a row.  But then in the third week he may leave an important assignment at home on the day it’s due.

Or there’s the issue of being accountable for one’s own actions.  This week you may be surprised when you ask, “Who was supposed to feed the cat?” and Lori says, “Oh, sorry, I was.  I’ll go do it now.”  But next week the same question may cause her to reply, “I forgot, but it wasn’t my fault!”

Don’t expect every step forward to be permanent.  But don’t get discouraged either when they fall back into old habits just when you thought there was reason to hope.  It may be uneven progress – but it’s still progress!